We only spent three and a half days in Cambodia but, boy, we did our best to do justice to the place.
To my relatively naive eyes Phnom Penh seemed older, poorer and dirtier than Saigon.  I loved the place almost immediately. We caught tuk-tuks and rode through the dusty, dusky Thursday evening air. The Velkommen Guest House, at one end of yet another chaotic, pungent street, was run by a pleasant, chatty Norwegian geezer. My room was big enough to host a five-a-side match.
We enjoyed Khmer and Thai food on our first night, before heading to Sharky Bar to say hello. We met Ben, who presides over the venue, and enjoyed a few cold beers while we discussed our Friday gig. The staff made us feel special and we had a very pleasant session before disappearing into the Cambodian darkness. 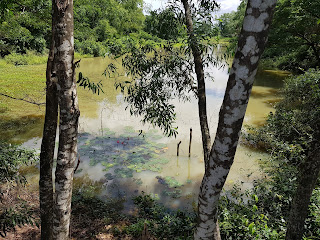 For most people, Fridays are full of optimism; the weekend beckons. For us, this particular Friday was a little short on wide-eyed happiness. We took tuk-tuks out to the harrowing killing fields of the Choeung Ek Genocidal Centre where we were exposed to the most barbarous elements of humanity. We also visited the Tuol Sleng Genocide Museum (S-21), and it is fair to say that we were emotionally spent by the time we returned to the hotel. I'm glad I went, but I was happy to leave when I did.

After soundchecking at Sharky, a few of us went for a wander around the markets. Clothes first, then the food markets. I wouldn't recommend the meat unless you want flies with that. 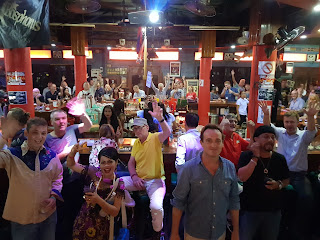 The Sharky gig was probably the best of the tour so far. It is an anglo-themed bar, but the clientele was probably an even mix of Cambodians and ex-pats. Sharky had been promoting us for months; they'd even organised a radio interview for Sneaky and me last weekend. I think the publicity drive worked. It was their biggest crowd in months, and we responded. There was lots of dancing and singing along among the masses. Rich the sound guy, Packo and Ben looked after us very well. Everything about the show seemed to work, and we raged through our three sets as if our lives depended on it.

Just one of those nights. 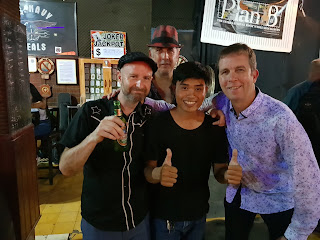 www.davidrobinsononline.com
Posted by David Robinson at 10:07 AM