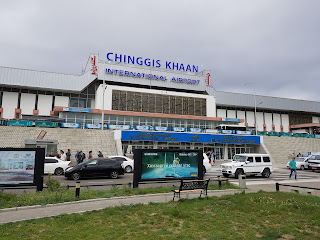 I don't think anyone from our touring party was looking forward to the trip from Vietnam to Mongolia. Three flights, three countries and the best part of a full day's travel.
If only it had proved that simple.
The odyssey began with me being jolted from my sleep at 4.30am. Ouch. An hour and a half later we were checking in for the flight to Guangzhou. Getting the instruments onto the plane was the first of a few challenges we were to face. We won in the end. The flight was smooth; the chap next to us heard us chatting and became an instant fan. He took a photo of himself with Peter Guitar and me.
Guangzhou was where the fun really began. We were installed into a nice lounge while we waited patiently for our flight. What could possibly go wrong?
Firstly, we were bumped onto a later flight. This would mean that we would have to be efficient in Beijing if we were to make our connection. An hour before boarding we were told that the flight had been cancelled due to extreme weather. No more flights until morning. It looked like we'd be sleeping in the airport. More by luck than skill, we found out that the airline was willing to put us up. We travelled to a very nice hotel, enjoyed dinner out on the street, and managed about four hours sleep before being ferried back to the airport before dawn. 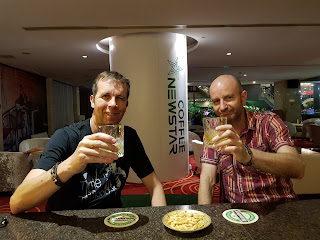 We flew to Beijing, already half-a-day behind schedule. We inquired as to the viability of our Mongolian Air tickets, and we were all but assured we'd be ok to fly to Ulaanbaatar. At 10.00 that evening. Great.
Airports are wonderful places to kill time. More boring than a budget speech, and more expensive than an angry ex-wife.
Somewhat bloodied but unbowed, the seven of us lined up to be first to check-in when the gate opened. And, of course, when we told them of the assurances we'd received they didn't want to know.
Eventually, someone in control explained that they'd try and get us on but couldn't guarantee anything. The plane was fully booked and we would be relying on no-shows.
We waited patiently, if a little angry and worried, for another four hours. During that time we were informed that 35 people hadn't shown up, so our hopes of escaping China were raised. About 20 late-comers showed up in one go, adding to our stress levels.
Sometime after 10.00pm, we were told we'd made it onto the flight. We joined the millions of sheep, sorry, people at passport control and security, and made it to the gate not long before the flight's doors were scheduled to shut. Hooray. Only one small problem - there was no plane in sight. 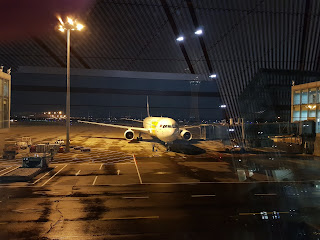 After all that, it transpired that our plane had been diverted due to weather. It wouldn't be leaving at 11.55.
It did show up, hours later, and we finally took off at 5.30. Two hours later we arrived, a somewhat bedraggled-looking bunch, at Chinggis Khaan airport. We had been in transit for over 48 hours.
Hello Mongolia!

www.davidrobinsononline.com
Posted by David Robinson at 11:18 AM