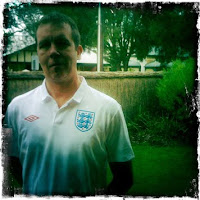 Less than a week after managing my own storm water issue, and feeling a small sense of pride, some of our more serious plumbing decided to make things interesting.
I got home on Friday night to be greeted with the news that a water pipe had burst under the carport, and my party mood immediately disappeared. The water had been turned off though, so we weren't too panicky. I had, however, no idea about how it could be fixed.
We called the emergency plumber on Saturday morning, and waited. We only turned the water on for our rapid-fire showers, then we filled all of our buckets with rainwater. The plumber arrived, he spent a good few hours digging up about 15 metres of million year-old rusty galv pipe (it couldn't be fixed) and replacing it with the modern plastic equivalent.
A small fortune later, we were back in business.
The amazing thing was the sense of helplessness I felt - something bad had happened on the property and I couldn't fix it. Thinking rationally a little later, I realised that plumbing is only one of a great many things about which I don't have much of a clue.
Not so clever after all!

www.bleakumbrella.com
Posted by David Robinson at 11:31 AM