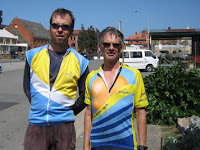 I was expecting a tough day, as the profile and wind forecast were both suggesting hard work. I wasn't disappointed.
We packed for the last time, and left camp around 7.30. The gentle downhill 30 kilometre run into Gawler seemed like anything but. The wind was fierce, blowing us sideways, and there was more than a little climbing, even if it was a nett downhill leg.
The five kilometre climb out of Gawler wasn't bad, and the ride along the top had its moments, both good and bad. The wind was another ripper though; probably the stongest yet.
The ultra-slow grind up to the summit of One Tree Hill Road was a bit of a heartbreaker. Not a lot of space for bikes and traffic, especially when you are tired and a bit wobbly...
The sideways buffeting of the wind as we re-entered the suburbs made playing with the traffic even more difficult than usual. I got the feeling the most of the drivers felt that four or five inches was more than enough space. How considerate...
The ride into the city along the Linear Path was a relief, notwithstanding the occasional idiot dog owner.
I was delighted to arrive at Bike SA, some nine days after leaving, relatively intact and in good spirits. Lunch, the gathering up of gear and the usual bittersweet farewells were brief.
The toughest day of the ride was saved until last, so I definitely earned my Radox bath that afternoon.