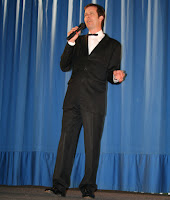 Almost as soon as I'd gotten off my bike, I was back into the cut-and-thrust of the Ethelton Entertainers' season. I'd missed the first four performances due to being away, so when I sat down amongst my band mates on Tuesday night I felt a little like a new boy.
I've been a member of this troupe for around 20 years; I started helping behind the bar in the early nineties and once they found out I played guitar and sang a little, well, that was that. I moved from the bar to the 'orchestra pit', and that's where I have stayed.  Apart from getting up on to the stage to sing a song or two each night.
Every year the show plays nine nights; sellouts more often than not. It has afforded me the privilege of playing with some very accomplished musicians, and has also allowed me to perform some wonderful show tunes on both bass and guitar. It's been great fun.