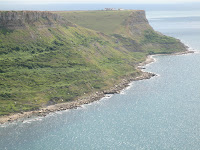 So, this is it. After four and a bit weeks, we are preparing to head home.

It's been a blast. Everyone has been so lovely. We've walked in the countryside for miles and seen some truly breathtaking sights. I've performed in Derby, and no-one threw anything at me. We've been to Lord's, Wembley, Trent Bridge and the KC Stadium and seen some top-drawer sport. Swinging London was fun, as were the additional mod excursions. We've visited Abbey Road and a host of other Beatles' landmarks. We've stood on the most western point of the island. The beer has been great and I've eaten twice as much as I've needed.
Hooray for us!