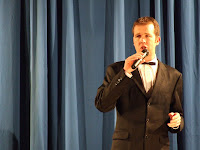 Last night, I braved the inhospitable winter cold and went to my first Ethelton Entertainers' rehearsal for the 2010. Good thing too, as the show commences at the end of September.
It's been running for years, borne out of a 1970s school production that has grown significantly as time has passed. What was a show put on by a small group of mums from the local school now boasts an annual two-week performance season, playing to 100 people per night, raising money for Camp Quality and the school. The troupe comprises 30-40 people, all pulling their weight backstage, on stage, and anywhere else they are needed.
Apart from treading the boards to sing a song or two, I spend the nightly performances snugly ensconced in the orchestra pit. I get to play my Ibanez Beatle bass for two weeks, which is the only serious workout it gets these days. The band comprises anywhere between four and six musicians, and all bar me are highly skilled players. I am the baby of the group, with most of the others being highly-regarded members of the local jazz scene a generation before I was born. It is a pleasure and a privilege to play with such wonderful people.

www.bleakumbrella.com
Posted by David Robinson at 8:29 AM