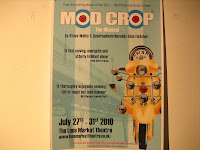 We went to Nottingham on Saturday to watch a play called Mod Crop. I'd seen the flyer in the Derby TIC and managed to get what were just about the last two available tickets. The people at the Lacemarket Theatre were very helpful and our tickets were waiting for us when we arrived for the Saturday matinee.
The play is a worthy effort; it borrows quite a few settings and affectations from Quadrophenia but stands alone as a good story. It is written by Steve Wallis and Alan Fletcher (who wrote the novelisation of Quadrophenia). There's two shiny scooters (one of each) that are put to good use, there's video footage, and there's recorded music in addition to the live renditions of sixties' classics. The actors were convincing, and the band did very well with the music. I felt old.
Songs included The Crying Game, Lazy Sunday, Substitute, Catch the Wind, The Clapping Song and the classic All or Nothing, amongst others.
We are the mods!
www.bleakumbrella.com
Posted by David Robinson at 1:05 AM