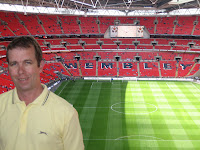 Wembley. If you'd told me ten years ago that I'd get to watch United there one day I wouldn't have believed you. Two years ago I was lucky enough to do it, and we managed a repeat performance last Sunday.
Getting out there was an easy tube ride from Baker Street. We were pretty early so getting into the stadium was similarly simple.
Our seats were in the second to back row behind the goal at the United end. The science of modern stadium design meant that we weren't too far back from the touchline, just quite high up. I'd never seen football from that perspective before and, to be quite honest, it was very enjoyable. You can actually see the game unfolding. even if you can't see the whites of the players' eyes...
There were only about three vuvuzelas in the whole stadium and I think that they were all around us. Whoever thought that they were a good idea should have one inserted into their person.
The game was terrific. The good guys won, the bad guys lost, Javier Hernandez scored in his first proper United match, and Paul Scholes showed why he truly is the footballers' footballer. Apart from his first attempt at a tackle.
Getting home was the expected well-organised but crowded affair. It would have been tolerable except for the two fat lads who decided to board our already packed carriage just as the doors were shutting, ensuring that the trip back to Baker Street was an enviable mix of sweat, alcohol fumes, swearing, and body odour. I'm relieved, to some extent, that stupidity and inconsideration appear to be universal.