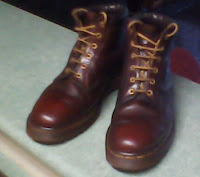 As the sun rose this morning, I suspected that it was going to be a good day. I'd been up for a while, awake at six, clear-headed and feeling quite chipper. All the early signs pointed to it being a good day. A pessimist might have chosen to believe that it was too good to be true. Bad luck, pessimist - not today.
I watched a couple of decent games of football in the early part of the morning; New Zealand getting a point off Italy being the highlight. The Italians are very skillful but far too prone to diving for my liking. I know all teams do it but you'd think some of these guys in blue had been shot. It's embarrassing for them, and bad for the game...
I tucked into some toast and orange marmalade for breakfast, accompanied by my third or fourth cup of tea. I might be a tea-aholic.
I did a few chores, including polishing and applying dubbin to my faithful old Doc Martens, as I'd worn them yesterday. Here's hoping that they last forever. I also managed to dispatch the usual room-to-room tasks without complications. Monty and I went out for a walk, and we were both very well behaved as we strolled in the sun. I also reacquainted myself with my music recording software; not an easy job, but it will be ultimately rewarding. I swapped emails with friends living in various places on Planet Earth, and read the local paper.
In the early afternoon I walked to a friend's place and we split a bottle of wine while we watched The Crow. I'd never seen it and it was so much better than I'd been led to believe... We followed this up with some intelligent and thoughtful conversation (largely on his part); a rare thing that should never be taken for granted. He lent me a CD of Evil Dead: The Musical as well as his DVD copy of Blade Runner: The Final Cut, so there's another couple of treats awaiting...
I walked home in the pale but warm late afternoon sun, stopping to pick up my watch that I'd left at the jewellers for some minor repairs. No charge! I celebrated by buying two $8 Clint Eastwood DVDs, on sale at the newsagent - The Outlaw Josey Wales and Unforgiven. That constitutes a win.
A little further down the road I chatted with an older chap who was taking his evening constitutional. We exchanged greetings and marveled at the lovely sunshine. It occurred to me that too many people would rather look the other way than risk meeting eyes and having to say "hello". What a shame.
Arriving home I made tea - a cheerful melange of lentil-oriented goodness - and had it on the table at the usual time. I fed the dog, spoke on the phone with my Aunty in England, did a few more jobs and now it is just about time to crack a cheeky red and prepare for the latest installment of the World Cup. I might sneak in an episode of The Wire beforehand.