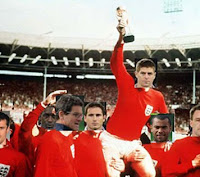 I've spent most of today either watching the World Cup or playing/recording music. It's been hard work, but someone has to do it. I did find the time to mow the lawns, and also managed to squeeze in a few other minor chores. I wouldn't want anyone to think I was shirking my domestic responsibilities.
It's been mainly music though. My three songs are taking shape. I would have done more, except I can't really soundproof my room to the extent that the racket emanating from next door's noisy renovations are shut out completely. Sigh...
I am hoping for a decent sized couple of days, recording wise. I don't have much else on my plate, so I am vaguely confident that I will wake up on Wednesday with only the final mixdowns to do.

A late night tonight, England versus Germany. Come on you reds.