Square eyes and round balls. 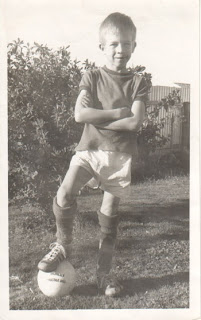 It comes around every four years.
It is a time for heroics, supreme athleticism, high drama, romance and joy. It has its share of gamesmanship, histrionics and broken hearts. It makes heroes and villains of men, some of which will be remembered forever. And, when all is said and done, one team will be able to say that they are the best footballers on the planet.
Welcome to the FIFA World Cup.
I watched my first World Cup in 1974, beamed all the way from (West) Germany into my lounge room courtesy of ABC television. I marveled at the skills of Beckenbauer and Cruyff et al as I fought against lack of sleep. All the while trying to come to grips with heady concepts such as total football. There I was, an impressionable schoolboy, sitting in the cold, eating comfort food and drinking tea, trying to stay awake. Completely mesmerised.
I've barely missed a televised match since those days. I was smitten, and remain so.
The 2010 tournament, the first to be staged on the African continent, is underway. It has been a slowish start in terms of thrills and spills, but there's been some great moments nonetheless. I am in no doubt that things will hot up once the results become critical for survival in the competition. It's not even a week old and I have already enjoyed 14 football matches. I think I've spent more time watching the games than I've spent sleeping...
Which is exactly how it ought to be.

www.bleakumbrella.com
Posted by David Robinson at 11:11 AM

New comments are not allowed.