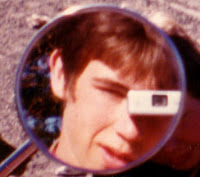 When I was younger, so much younger than today, I was a mod.
I suppose I still am, although I am probably not quite as sharp as I might be. I sometimes wonder what 17 year-old David would make of the 2010 version.
It was a great part of my life, coinciding with that awakening that (sometimes) occurs as we pass from childhood to adulthood. New music, good clothes, scooters, and self-respect. Wonder years, indeed.
I am, as many of my friends would know, a part-time scribbler, and my work has appeared in various newspapers, magazines and newsletters both in Australia and England. Yesterday was another great moment, with the arrival of a very welcome package. My literary efforts have now appeared in a 'proper' book - Stark Raving Mod!, put together by Sydney-siders Ariana Klepac and Winston Posters. It has been some time in the making but the result certainly makes me happy. It is a wonderful collection of anecdotes, recollections and photos from those heady mod revival days. Not only do my contributions appear throughout, which is pleasing in a self-centred kind of way, but I truly believe that this tome is at least as good as Richard Barnes' Mods!, an English retrospective released many years ago and still held up by many, including myself, as the benchmark.
The press has been favourable, and the book has its own site. Buy a copy if you are into music, fashion, youth, and/or lifestyle.
Aaah. Yesterday, all my troubles seemed so far away.