Another day, another David... 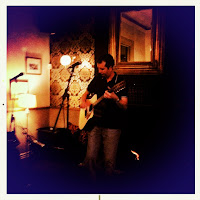 Tuesday arrived, as it seems to do every week, hot on the heels of Monday. With my hands still tingling and my legs still throbbing from my mountain bike hi-jinks, and with a final Monday night Ethelton Entertainers' rehearsal under my belt, I awoke to a day that promised to be different again. I chose another face from the jar that I keep by the door...
Tuesday normally means an open mic performance, and once a month it is also the night I run a songwriter's workshop. The venues are close to each other (aah, Adelaide) so it's not a logistical nightmare to get to both.
I spent the day trying not to think about the bike, tent and other camping wreckage that was piled in the shed, and trying not to think about the music and songs I still had to bed down for the show. I attempted to keep the workshop/open mic in the forefront of my mind. I responded to workshop emails, rehearsed my own songs, thought about one I could present at the workshop, found the various folders and papers I'd need for the evening... generally I kept busy in the music room for most of the day. Apart from the two hours I spent watching The Magnificent Seven in the afternoon. What a movie!
The workshop, featuring the talented John McCall, was a success. At the beginning there were seven new faces, which was refreshing. Alas, many of our regulars were missing. Still, it's their loss. It was a good night, even if we only had two volunteers for the songwriters' circle.
The open mic was also groovy. Not only did I have fun on stage, but it was good to catch up with people after being away last week.

Spending the evening amongst musical friends. There's not much that can top that.

www.bleakumbrella.com
Posted by David Robinson at 11:50 AM