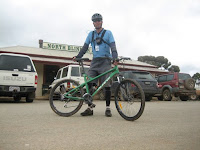 I've spent the last week or so on a 500-kilometre cycling tour of the Flinders Ranges. It was great fun, hard work, and cold & wet on occasions. They have had so much rain up there that I doubt I will ever see the landscape so green ever again.
Generally I do at least one tour per year; this year's ride was a great opportunity to see the Flinders from the road, and in the springtime. I've been up there three times before, but always in April, and as part of an off-road trek. Something different was in store this time.
The 90-kilometre long, straight road from Blinman to Parachilna, and the dirt road from Parachilna to Blinman, have now been added to my list of northern adventures. I have successfully navigated water crossings, having pedalled through five of them. I have crossed the windy Willochra plain in both directions, and ridden the fast track from Wilpena Pound to Hawker in the morning sun.
Early starts were the order of most days and, despite the cold, I jumped in the saddle as soon as I was ready. The afternoons were spent comparing the quality of Pale Ale in the various towns' pubs, and nightfall brought about the communal meal and some fractured sleep in my tent - due to the cold temperatures as well as the sweet sound of people snoring their heads off.
I arrived home this evening, having finished off the tour in style with an 83-kilometre morning ride through Horrock's Pass. A fair climb was followed by about nine kilometres of fast downhill, the first section on smooth bitumen before giving way to a bumpy stretch of packed gravel. I barely had to pedal. Fun times indeed.
New friendships were formed, and it was great to catch up with some familiar faces. Sometimes these trips achieve a near-perfect balance between the bike-specific and the social aspects; on balance, I think this ride just about got it right.
A few spokes got broken but, apart from that, the bike and I have emerged relatively unscathed.

No matter how good your adventures, it's always nice to get home!