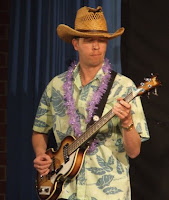 Wednesday evening. It's cold outside. Inside the gymnasium-cum-concert hall, 100 punters sit at their tables, sipping their complimentary sherry, waiting to be entertained. Some look at their watches, counting down the minutes. Others chat excitedly as they scoff down the snacks.
Backstage, it's a happy kind of chaos. Too many people, not enough room, and eleven conversations going on at once. Clothes everywhere. The air is filled with the scents of perfume, talc, and sweat. And wine.
Showtime.
Opening night.
Stage positions aren't quite perfect; people are clattering into each other. Microphones fail, then burst into life mid-song. Lines go missing, only to miraculously reappear somewhere further on in the dialogue. The band just about holds the songs together; it's the first time they've played as a group. The sets and costumes look so much better under lights. Raffle draws and old, bad jokes give the stage people a chance to change the sets.
It's a long night. Well over three hours of entertainment. It all seems to have gone very well, as far as opening nights go.
As the last strains of Show Me The Way To Go Home disappear into the ether, people stand, shake hands, hug, and gently wander into the chilly night air. It's way past bedtime.
I suspect they've had a good night, but that is really for others to judge.